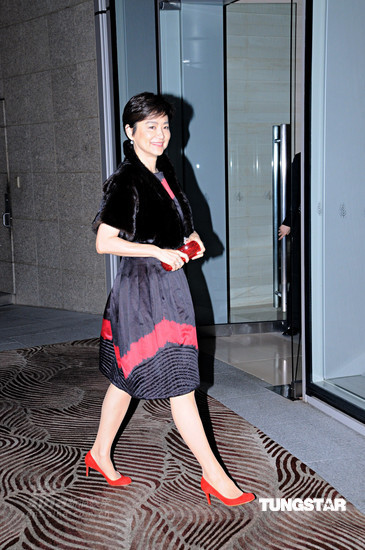 In January 2009, it was reported that Wong Kar-wai had invited Brigitte Lin to appear in “The Grand Master.” It was originally thought that she would be playing the role of Yip Man’s wife but this was later denied by the film’s producer Ng See-Yuen.
He admitted that they had dined with the actress and that she had agreed to star in the film. However, they did not know what role she would play. He hoped that the reports would not change her mind. Did Brigitte Lin have any conditions for her comeback? Ng See-Yuen expressed that he did not know, but that the actress and Wong Kar Wai are great friends.
According to Taiwan’s United Daily News, Brigitte Lin’s character was shrouded in secrecy but that there are scenes where she will have to be disguised as a man, harking back to her previous androgynous roles.
In September 2009, it was reported that Brigitte Lin turned down a role in the film because it was not tailor-made for her.

In February 2009, Yip Chun (son of Yip Man and an adviser on “The Grand Master”) stated during an interview that Wong Kar-wai was thinking about inviting Gong Li to join the project. Speculation in the media about what role she might play followed, with many fans apparently believing the subsequent reports that she was co-starring in the film. It was at first reported that she would be playing Yip Man’s wife but was later stated that the role would be “a female martial arts master from Foshan.” However, the casting idea was unconfirmed by others associated with the project.

In January 2009, it was reported that singer/actor Jay Chou would be playing the part of Bruce Lee in “The Grand Master.”
At the 2008 Taiwanese Golden Horse Awards ceremony, the film’s producer Ng See-Yuen revealed that Wong had extended an invite to Chou to take part in the film.
In February 2009, Chou confirmed that his busy schedule meant he couldn’t take part in the film.