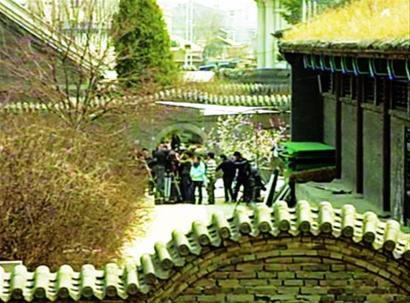 Filming continues on “The Grand Master” at Liaoyang museum.
Tony Leung and Zhang Ziyi filmed scenes in the courtyard. Zhang Ziyi was reported as being thin and wearing big sunglasses that covered half her face.
Security aroung the museum is really tight.
Antiques from a local shop were rented as props for the film.

Filming “The Grand Master” in Liaoyang War Museum Old Building and it’s hard to see any of the stars as the crew has not allowed others to stay in the hotels. The arrival of Wong Kar-wai, Tony Leung, Zhang Ziyi, and martial arts choreographer Yuen Woo-ping caused quite a stir with many people arriving to see the stars. The crew have worked hard to secure areas of the museum, with “under constructuction” and “closed” signs hung outside the doors. “The Grand Master” crew have signed confidentiality agreements to prevent leaks, with the museum also signing an agreement.They filmed indoors until the early hours, with Wong Kar-wai wearing sunglasses at the midnight shooting.Â Security is extremely tight and impossible to see the cast. Zhang Ziyi was spotted and described as being very thin and pale and Tony Leung also lost weight.

Location filming for “The Grand Master” began in January 2010 in Shenyang, China in below freezing temperatures.Wong Kar-wai is now shooting some parts of the film in Northern China with Zhang Ziyi and the Zhao Benshan. It will take 2 weeks for shooting this part, so they should be finished around 23-24 January. Wong Kar-wai then plans to return to Southern China to continue shooting with the other actors, like Tony Leung, Chang Chen and Song Hye-kyo.

According to this report, the script has changed once again. Zhang Ziyi is now playing a student of Zhao Benshan, with Zhao Benshan’s disciplines also participating in this film. The movie will become less solemn and more like a comedy. Zhao Benshan will play another martial arts master, most likely a Chinese boxer. The shooting site will move from the Guangdong province (southern part of China, near to Hong Kong) to another city in the north-eastern China. Wong Kar-wai wants to add winter and snowing scenes to the movie.

Wong Kar-Wai, Zhao Benshan, Zhang Ziyi, and Yuen Woo-Ping met in North-east Shenyang (Zhaoâ€™s base) to ring in the new year and prepare for the upcoming filming of “The Grand Master”.

“The Grand Master” has been secretly filming in Diaobingshan, Tieling City for the past two months. In order to prevent the plot from being leaked out, the crew has been extremely strict with reporters visiting the set. Even those delivering food had to sign confidentiality agreements.
On March 30th, reporters were finally able to uncover the latest progress from the movie. Actress Song Hye-kyo finished filming her scenes from the film yesterday. She flew back to South Korea from Shenyang earlier in the day.
Joining the crew after Chinese New Years, Tony Leung had a chance to meet with his idol Zhao Benshan in Diaobingshan. According to sources, Zhao Benshan will be making a guest appearance in “The Grand Master”. While his screen time has still not been confirmed yet, Wong Kar-wai will be keeping the workload light for his friend and will only arrange for him to film one scene in the movie.

Chinese news report regarding the filming of “The Grand Master” near Diaobingshan, China.
Filming at the old station of South Manchuria Railway (before 1945) with a steam engine. Also some scenes of a big funeral, possibly for Yip Man’s relatives.